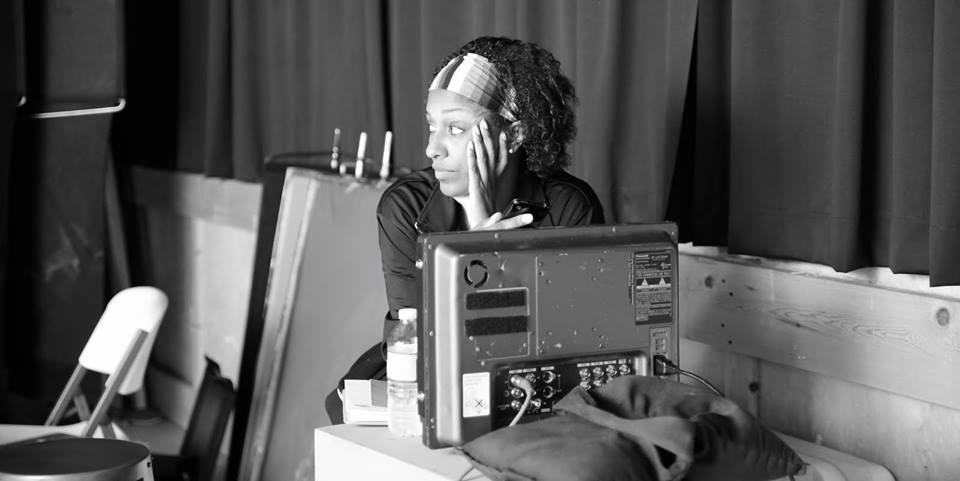 In 1995, when Shandra McDonald was accepted into the T. Howard Foundation Internship Program‘s inaugural class, she was a graduate student studying film at Howard University. One of just 14 THF interns that year, Shandra went on to have a successful production career, on her own terms.

This is Shandra’s first person account of her journey from intern to production company CEO.

I learned about the T. Howard Foundation through Howard University. Howard was always aggressive in encouraging its students to gain real world experience through internships. I had several internships throughout college, and Howard professors and career counselors knew me as someone who was always looking for opportunities to learn, so I always had my eyes on the career and internship board.

During my second semester of my three-year MFA degree program, I was hired as an intern at the Discovery Channel in nearby Silver Spring, Maryland through the T. Howard Foundation. I worked in the CD-ROM division, and at that time, Discovery was beginning to expand, so they were doing a lot of cataloging.

As a film student and a filmmaker, I wasn’t initially thrilled with the idea of working in the CD-ROM department, but I ended up loving it. I worked hard and met many individuals, and my manager was impressed with the work I completed.

Elevator Pitch Helps Land Freelance Job
I’m an ambitious person, and I pay attention to everything that is happening around me. While I was a CD-ROM intern, I learned that the Discovery Channel had a stock footage library, and I knew that there were different opportunities for work in that division. I met the division head in the elevator, and introduced myself and asked if I could set up a meeting with him.

As a film student at Howard University, I was learning about traditional narrative-based film editing and directing. But during my internship and freelance work at Discovery, I had learned and experienced first-hand about offline, non-linear editing, which made me more versatile. As a direct result of that internship, I was offered and accepted a freelance editing position in Discovery’s newly launched international division. This work offered me an additional education that I was being paid to receive—although I had to balance activities and my graduate school thesis. At the time, I was also producing projects at Howard, and I was gaining valuable experience that I could translate into a full-time job.

Timing is Everything
As a freelancer in the international division, my manager knew I was preparing to graduate with an MFA. He was seeking a full-time producer, and the timing couldn’t have been better. Because I had worked for Discovery as an intern through the T. Howard Foundation, I was hired as a freelancer, which ultimately led me to a full-time producer position, a job for which I didn’t even need to apply because I was already vetted and in the Discovery system.

Prestigious Award is Catalyst for Move to L.A.
In 1998, after learning that my Howard University short film thesis won the Directors Guild of America Student Film Award, I was invited to move to Los Angeles to work in post-production for several BET movies that were based on romantic novels. I worked on that project for close to a year before I freelance wrote and produced for reality television production companies.

I moved to Atlanta in 2002 and worked for Paramount Pictures on The Fighting Temptations. As Atlanta was growing as a production city, I began field producing and story editing for Turner and a number of Atlanta-based production companies.

Reach High—But Don’t Go Overboard
In 2005, I formed Kiss the Limit Productions, where we tell stories that transform peoples’ lives. I realized early on in my career that I wanted to present empowering stories, and those that are compelling and artistically based. Kiss the Limit is a reflection of my motto that you have to reach for the greatest heights in this industry, but not go too far. My company produces short and long form content for a variety of clients in television and film.

Through Kiss the Limit, I’ve produced such feature films as The Last Adam, which is now in Redbox, and A Cross to Bear, which aired on ASPiRE, formerly the Gospel Movie Channel. I’ve also directed and produced award-winning documentary projects that have screened in festivals around the world, including the FESPACO Film Festival in Burkina Faso and the Cannes Film Festival in France. My company is currently producing a documentary on an early intervention model for girls who are at risk for prostitution called Voices. Kiss the Limit secured money from investors and a local bank for this project.

Starting this fall, I’m going to be a professor in Clayton State University’s film production department. I’m excited to share my experience in the field with future filmmakers.

This media business requires a great deal hard work, dedication, innovation and strategy. I knew where I wanted to be in a year. I knew which department I wanted to move to. You have to be able to think ahead and to strategize for evolution through a company and career.