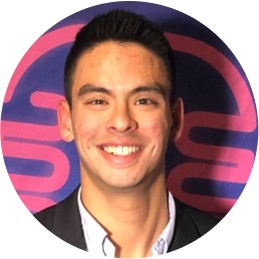 What do you enjoy most about your company?
I’d say it’s split down the middle between my role/my team and the overall company culture. I work on a very new and very small team within Universal Pictures and while our primary focus is working with the theatrical marketing group, we’re starting to branch out and service other parts of the broader film business. Beyond that, I’ve been at NBCU for more than four and a half years and across the board I’ve worked with some fantastic people and can comfortably say that is one of the strengths of the company.

In what way did this type of work interest you and how did you get started?
I studied economics in college and while there are certain limitations to economic theories, I’ve always been drawn to the analytical mindset that it brings. I started at NBCU in the West Coast Page Program and got a ton of exposure to all parts of the business. I wasn’t 100% sure exactly what I wanted to do, but I knew I liked the business side of entertainment and while it took a few years, I ended in a role that applies analytical work to a discipline which is inherently creative, especially when it comes to how content consumption patterns have changed even in the last two to three years.

Has your career path been linear or non-linear?
My career has been about as non-linear as it gets, and I definitely anticipate more twists and turns in the next few years. From sophomore year of college through graduation, I thought I wanted to be a play by play broadcaster or studio host and work in sports media. That didn’t happen mainly because I realized I didn’t want to make the sacrifices necessary to get that on-camera experience you need to work in sports media (at least in the capacity I wanted). So, I had to turn my attention to other roles, and ended up in the Page Program as a way to get exposure to an unfamiliar industry and see if I could find that next step. From there, I worked as an executive assistant to the CFO of (what is now) the TV studio group at NBCU. Finally, in January 2022 I ended up being offered my current role, where I’ve had the opportunity to do some really fascinating work in a rapidly changing industry. Plus, I couldn’t be happier with my team which has been a blessing since day one.

How has your affiliation with the T. Howard Foundation influenced your career?
I wouldn’t be where I am today without the T. Howard Foundation. Not only did the T. Howard Foundation open the door to me getting my internship with Spectrum SportsnetLA while I was in college, but they helped flag early career opportunities like the Page Program which helped me figure out what my next career path would be. On a broader level, some of the connections I’ve made through T. Howard are people I’d consider good friends to this day, more than six years removed from my internship. I’ve honestly thought about it as less of a network and more of a family than anything else.

What personal attributes have been essential to your career success?
Having changed potential career paths about four different times, the ability to be resilient and deal with adversity has been the biggest trait that’s helped me develop my career. I’ve had a ton of personal and professional obstacles thrown at me, and the biggest saving grace has been the ability to step back, reflect and continue to push forward. One of my previous managers used to tell me that she’d look at me and not have a clue what’s weighing on me at any given moment, and I’ve felt blessed to have that ability to compartmentalize. The other major key has been the ability to absorb as much of my surroundings as possible. Just by way of proximity, I’ve been able to absorb not only invaluable information but also general business experience from some incredible people.

Are you extroverted or introverted? How does this show up in your professional life and how has this trait benefited you professionally?
I’d describe myself as either the most introverted extrovert, or the most extroverted introvert. Either way, I feel strangely comfortable speaking in larger crowds of people but tend to find more difficulty in smaller to medium sized groups. The main benefit has been presenting my team’s findings to a larger group of folks in the marketing department. I feel very comfortable presenting to larger groups, especially when it’s something that I have my hands in on a daily basis. Ultimately, the downside of this is struggling to speak up in smaller group scenarios unless given a straightforward prompt to do so. It’s a deficiency I’ve been working on for the last few years, and while being fully remote until September of this year hasn’t helped, it’s an area I’m slowly improving.

Owen’s Piece of Advice: Be as open as possible to opportunities! I had no idea I would end up in this role when I started pursuing new opportunities while in my previous job at NBCU, and I’m a firm believer that I ended up in the best possible scenario just because I was open to pretty much anything. I took on roles previously, both at NBCU and elsewhere, where I may not have loved the work itself, but I really enjoyed being around the people I worked with and that’s more valuable than hard skills that you can learn and develop. You never know how much you’ll like or dislike a certain role (due to factors out of our control), so I always advise people to be as open as possible.