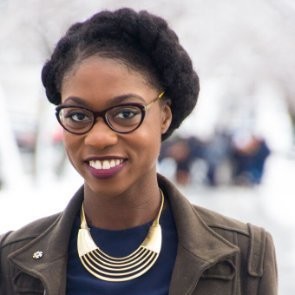 What have you been up to since your 2013 Summer internship with AMC?

I have a degree in international relations and immediately started working in television. I worked for media information services, logging for commercials. I was a liaison between advertising and television networks so advertisers knew what was happening in the show where their commercial was being placed. After that, I started thinking about nonprofit but initially launched The Dinner Table Documentary as a community organization.

My big break came in 2017 while working as a freelance associate producer with Lifetime. My organization was growing and I applied to become a 501(c)(3) nonprofit and decided to leave media and work in the nonprofit industry to learn how it works and how to create programming.

Currently I serve as Founder and President of The Dinner Table Documentary and continue to freelance in the media industry.

What inspired you to start The Dinner Table Documentary?

The Dinner Table Documentary was a short film before it was an organization. I wanted to create an alternative to reality television to show young women that we can do so much more than tear each other down. After watching the film, a number of students indicated an interest in actualizing the concept. I started planning dinners with high school students, college students, and working professionals where they could network and openly discuss their identities.

The first dinner had 92 attendees, by the second dinner we had a crowd of 150. That’s when I realized the need to create these spaces.

Of all of your accomplishments, what are you most proud of?

I am most proud of my students! I love being able to bring them into every space that I go into. I have been a part of the media industry and T. Howard for so long that I have leveraged my experience to bring students into these spaces. I am most proud of the fact that even though I am able to grow as a media professional, I can still bring my students with me.

Can you share a few highlights from your THF experience?

Orientation was definitely my favorite THF experience! I have never been around so many people who looked like me and wanted to do the same things I wanted to do. Being around everyone was empowering. Although we were interning in different cities, we became a network. The experience itself was so cool. Working at AMC, I was able to work alongside the Creative Services Vice President and getting to know him was awesome.

When my internship ended we did a one on one interview and he gave me this advice “Never be afraid to walk into a room and tell someone what it is you want to do”. This simple bit of advice helped me tremendously and changed the way I communicated.

Have you kept in touch with fellow THF Alumni?

Yes! I’ve kept in touch with almost my entire class. We use social media and THF events, like the Annual Diversity Awards Dinner, to keep in touch. When I launched my nonprofit I was met with nothing but support from my peers. I enjoy knowing that there are other people doing what I want to do and knowing they are just as passionate and working just as hard.

How has your involvement with the T. Howard Foundation influenced your career?

My involvement with THF let me know that anything is possible. I think the exposure to different parts of the media industry made me passionate about helping students realize that there are so many options to explore.

What advice would you give to THF interns and alumni as they being their careers in the media industry?

Don’t put too much pressure on yourself. Sometimes we have a lot of expectations about the way things should be. Being in this industry I’ve learned that nothing goes according to plan, but everything happens as it should. Be flexible knowing you may not start at the company you want, but the skill you learn in that role will help you move toward your dream role… or  you may end up finding something completely new like I did.

You have to be flexible and open to change. Make sure you give 110% to every opportunity given to you because the skills you learn in those roles will get you where you want to be!

Do you have any advice for aspiring entrepreneurs and professionals interested in starting a nonprofit?

Take a business class! It will give you a better understanding of vocabulary, terminology, and knowing things that should be on radar. As you continue to develop you may even find a business partner!